Alright, hope everyone has been well.  We're just rounding the corner to the rainy season and hurricane season here in South Florida. So unfortunately not the best time of the year in terms of weather. But hey, what can you do? South florida, right? So let's get right into the numbers. 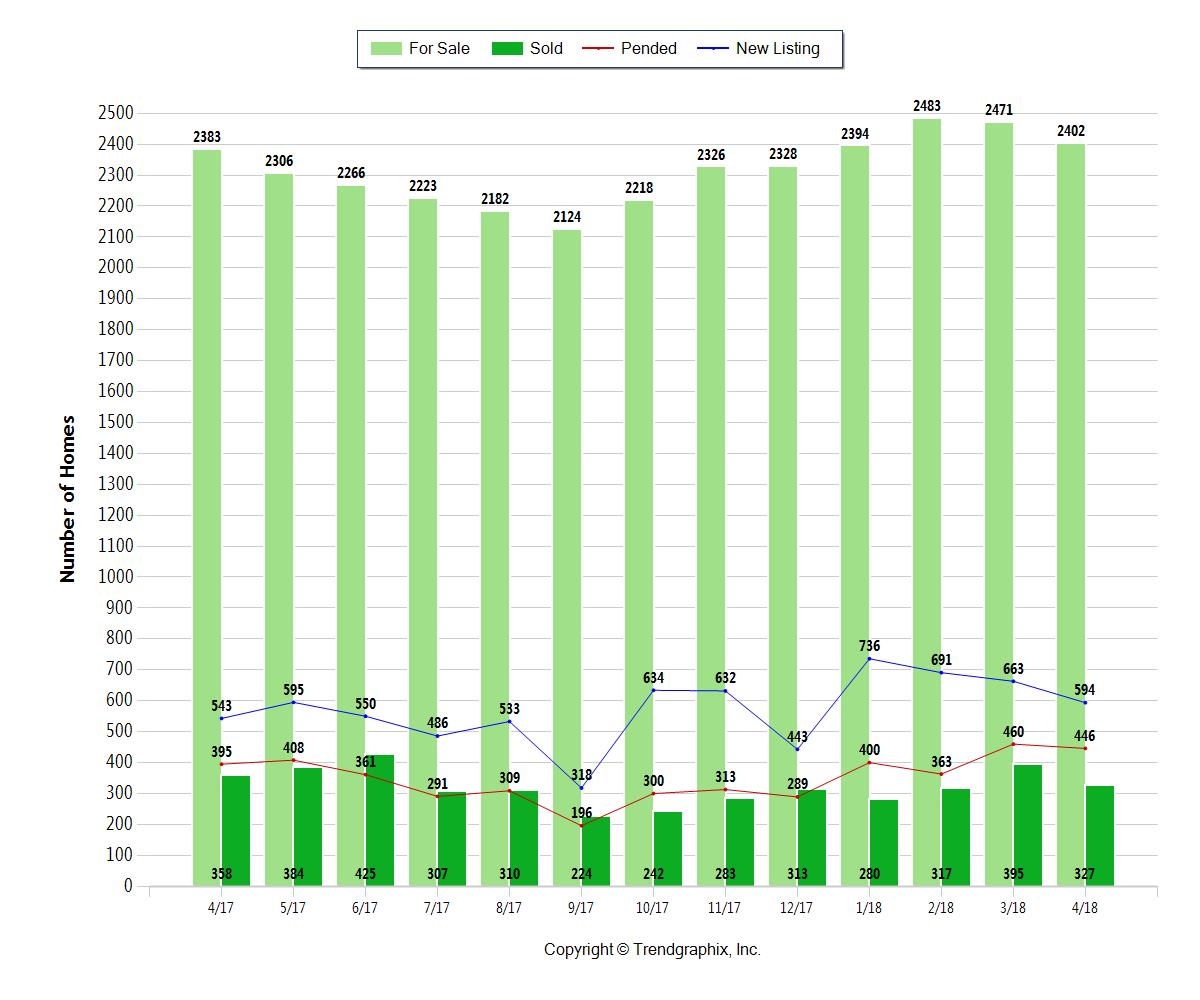 I have some good news for some people, and I have some lousy news for other people. So let's go ahead and break right in. First Things first, as always, we want to look at the number of properties that sold year over year. Really, it's gonna tell you what the market health looks like more than anything else. So 358 sales in April of 2017, down to 327 sales in April of 2018. So we're off by 8.7% Overall it's, just not good figures. We really want to see is the amount of sales picking up, the amount of For Sale inventory coming down. That's really what's going to help sellers. As I've been warning again and again to you guys, this is segmented by price point. If you're looking for $250,000  property, the market is going to look extremely different than if you're looking at a higher dollar property. Nevertheless, let's keep right on.  Listings, 2,383 April of last year, 2,042, let's call it even. It's a 1% difference, relatively unchanged year over year. But again, important to know there is a lot of sales or a lot of properties for sale out there. Buyers have a lot of product to choose from.  What this really means on the sell side that I’ve been saying again and again is if you're going to put something up for sale, you need to stand out not only through the marketing of the property, but through the condition of the property.  How it's shown. Right now, the properties that aren't showing great, if they are selling, they're selling at a discount. Like I said, just keep in mind buyers have a lot of options. Again, to reiterate, this is by price point, lower dollar properties are still moving really quickly, medium and higher dollar properties were seeing things move, but on the slower side. 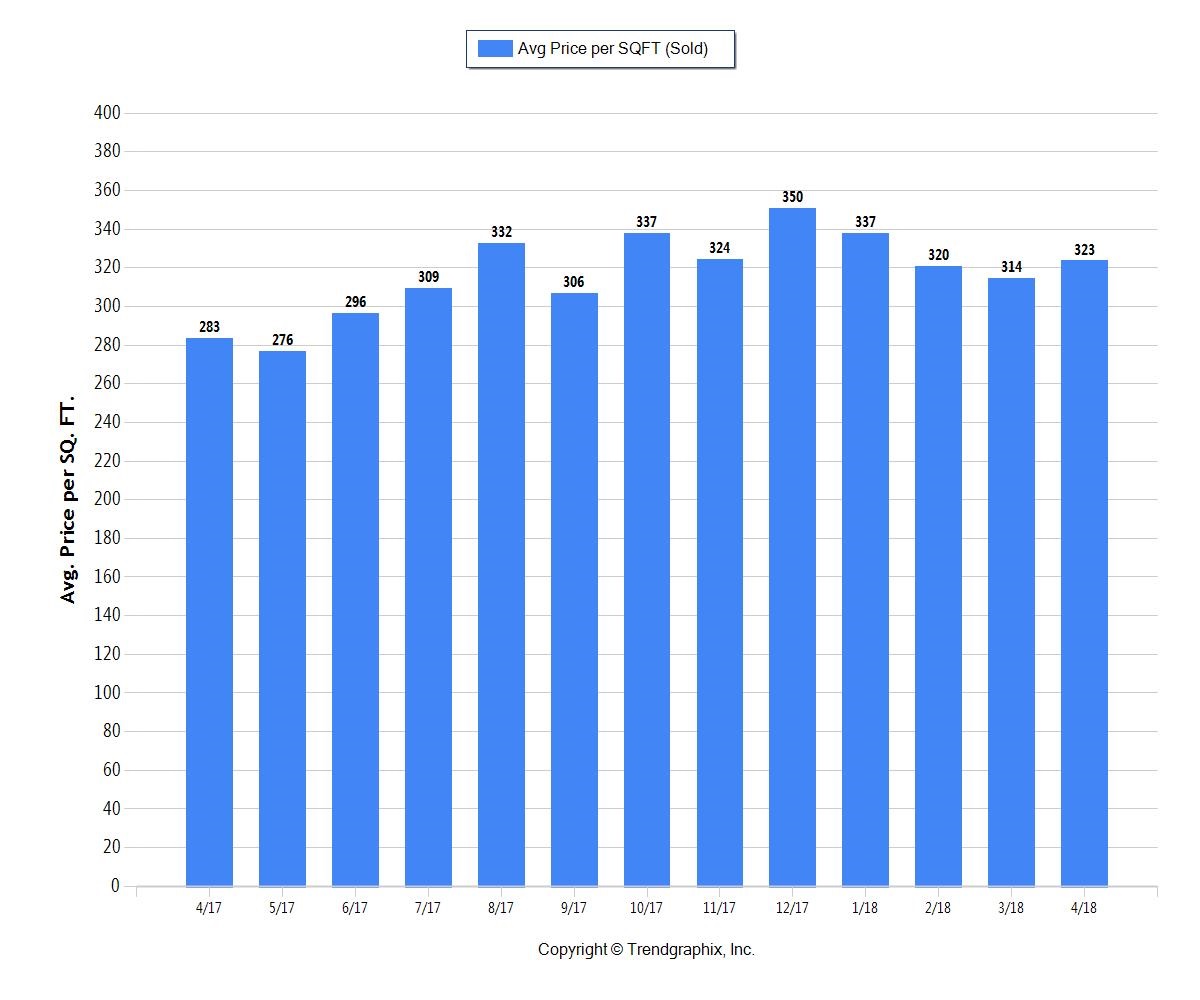 So let’s roll right on.  Average price per square foot from 283 to 323. So we're up 14.1%. What I do want to kind of highlight to you guys is something I've been saying, and it's becoming evidence more and more, and you're going to see it on the next slide as well. What's really happening here is that the lower dollar properties are really pushing up in price. Two things can happen in our area when we see the price per square foot number rising, it can be that the bottom is pushing up what was selling at $100 a square foot pushes up in price, and it brings our average up because we have an awful lot of activity, about half the activity, is below $350,000. So as that bottom pushes up, it's going to push up the average price per square foot. The other thing that can happen are high dollar sales. If we have a few $15-20 Million Dollar Sales clip through in a single month, it's going to push the price per square foot up because, those are water front properties, high end product, it's going to sell at a lot higher price than a star or home that’s landlocked. So keep that in mind as we roll to the next slide. 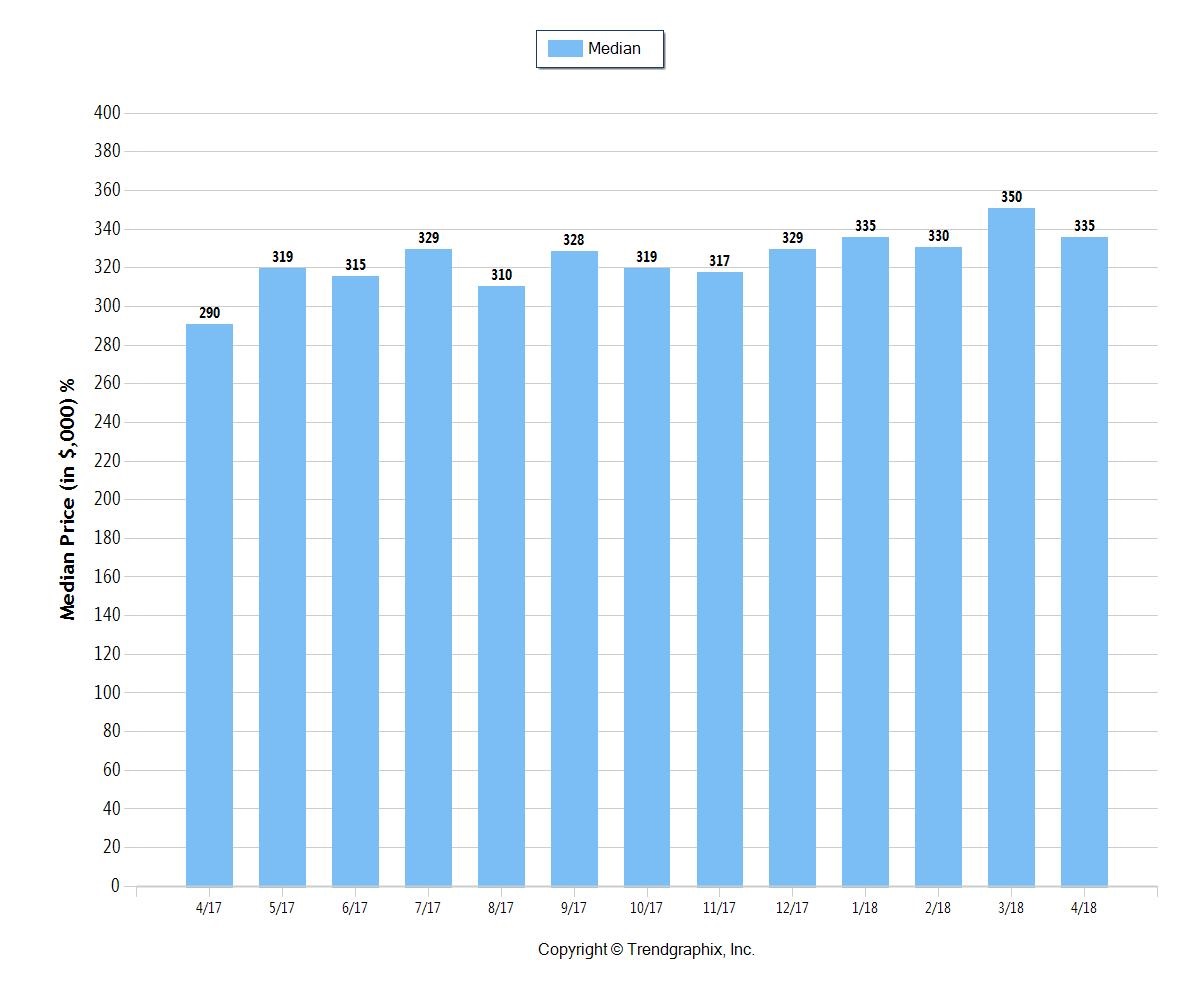 Median pricing from $290,000 up to $335,000. That's up 15.5% year over year. What I do want to say about this is where the market is getting extremely tight, is on the lower end.  I can't say this to you guys enough, if you're a first time home buyer, or if you're a seller and you're in that lower dollar price range, it's tougher and tougher to find something.  Price is really moving up from the bottom. So when I look at this median price per square foot, and I'm telling you, you guys have been watching, you know 40%-50% in a given month of sales happen below $350,000. So the bulk of the market, is moving in that lower price point.  That price point, it's been pushing up in price, it's going to push median sale price is up. So if you look at why that's happening, that's likely the reason. Once you get to $700,000 and above, we get to a slower moving product. So just keep that in mind. 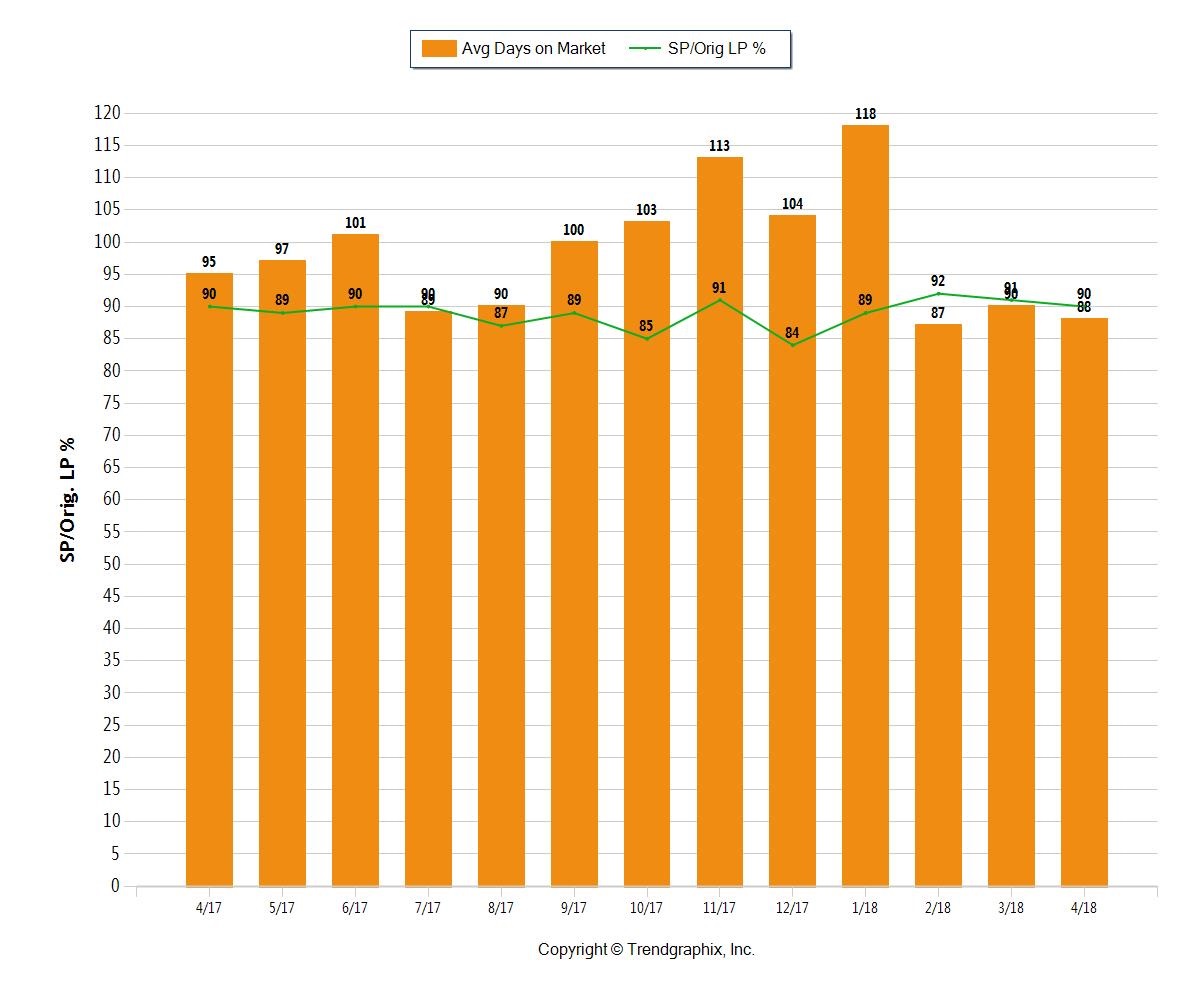 Days on market. Kind of an interesting slide here, right? The average days on market were 95 in April of 17 they’re down to 88 days on market in April of 18. So down 7.4%.  Basically just telling you, you should be able to sell your home in a few days less than you were. But again, we're still right around that 90 day mark.  Then of course to note the sold price versus the original listing price 90% tells you on the whole properties of selling for 10% less than they were originally price for. This can be due to a number of things. If you enter the marketing incorrectly, if you shoot too high, you're going to have to cut your price down. That's where you get a 10% gap from. It could be on the higher end where price negotiations are a little bit, the gap is a bit larger. It's not unusual to see something that sells for 10% off the market within a couple of weeks that's priced on the price on the higher end. There’s just more room for movement. This really isn't happening on the lower end. I’ve got to stress that with people a lot. You'd be lucky to get a couple of percentage points out of a lower price, lower dollar value property.  It's just tighter all around there. 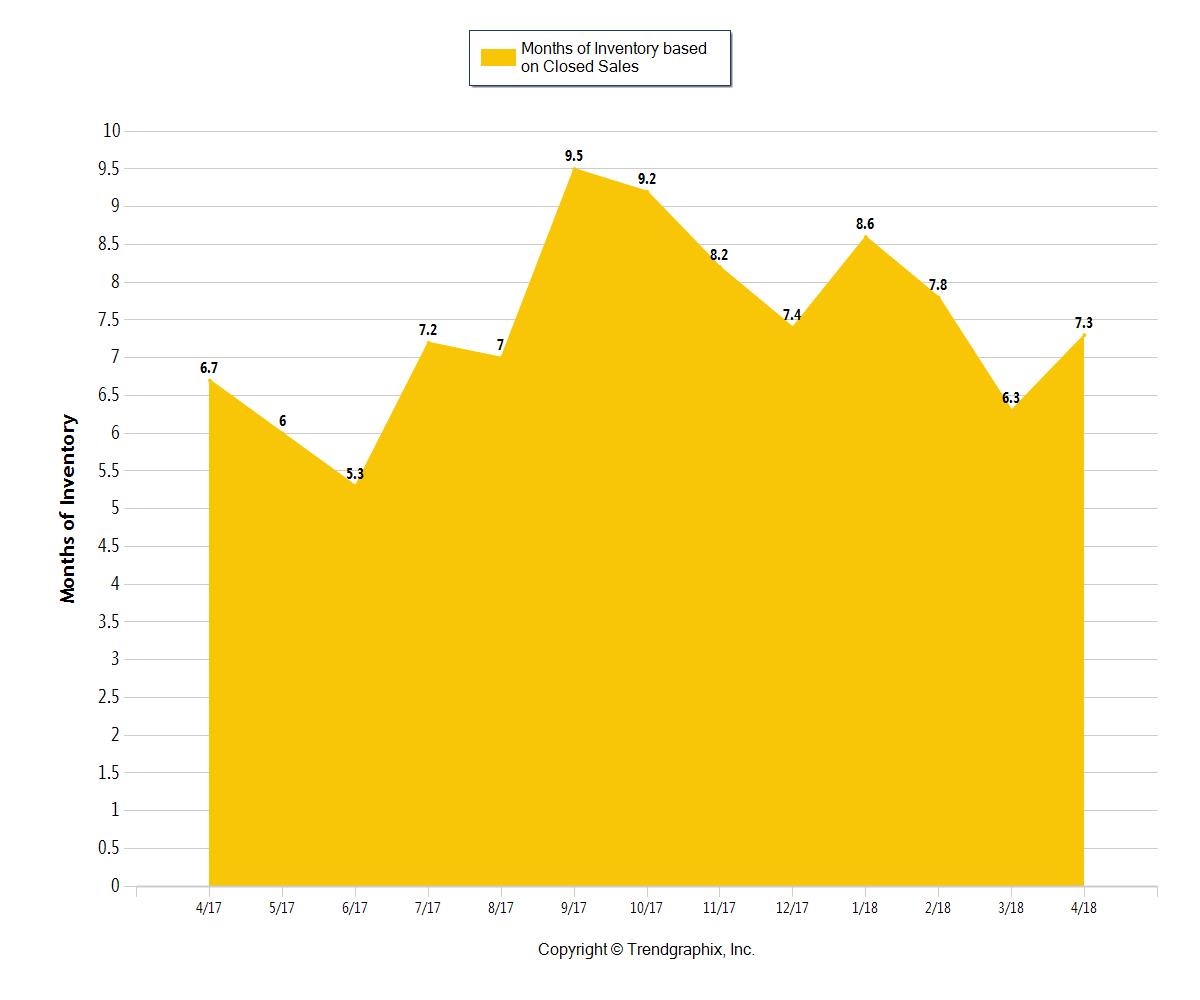 I just want to close it out with, to tell you guys on the website when I did the redesign, along the right hand side, you'll see a column for market reports. I tried to break down a lot for you guys that live in Southwest Ranches, Davie, up in Pompano, down in Hollywood. So I tried to create some market reports for those areas as well. You can go in and create some custom market reports for just about anywhere in Broward County. Again, it's just going to be along the right hand side of the website. If you scroll down, you'll see a whole section for market reports.  So if you do want to know what's going on in your local area, you want even more data than I give you, if you want to get zip code specific or anything. Because I did go to all of Fort Lauderdale for my information. Now, please feel free to do that. You have any questions on getting it set up, or if you want a little bit of guidance on it, as always call or email me. That's what I got for you guys. Hope you had a good month and I’ll try to get the video out the middle of next month. We'll see how it goes. We have a pretty hectic July coming up, so take care, hope all is well.